How To Ride A Motorcycle

I can still feel my shaking hands when I recall learning how to ride a motorcycle. I was feeling nervous on a 50cc bike…

The nervous was gone suddenly and come with exciting gradually as I started to drive it on the road. What an adventure! Four wheels move the body, two wheels move the soul!

Some people are great at learning skills. I have to admit that I’m not one of those people as I did a lot of homework to learn how to ride a motorcycle as a beginner.

If you are reading this post, chances are you want to dive into the world of riding a motorcycle as I did in the past. Riding is fun and it’s not as difficult as people think as long as you do your homework!

Before You Get Started

Keep in mind that riding is a very dangerous activity. 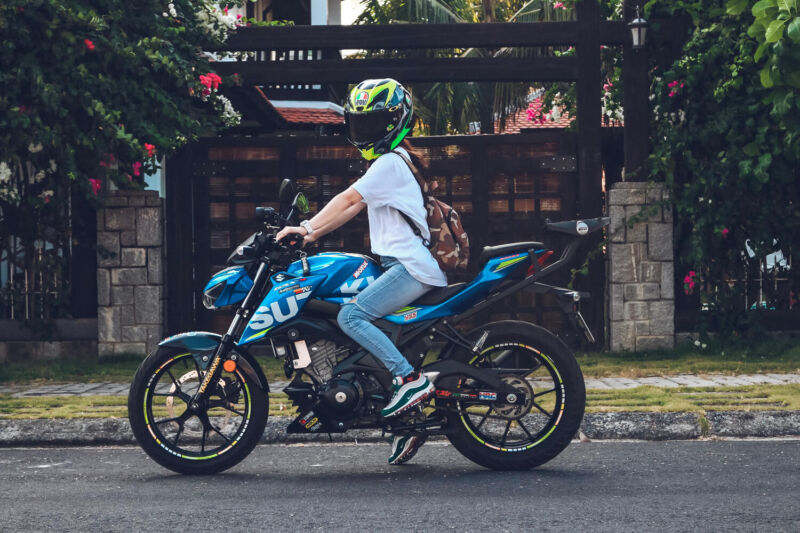 If you don’t want to pay for those training courses yet or no course available in your area.

For avoiding any motorcycle accident (even you’re practicing at an empty place), make sure you’re protected by wearing as much safety gear as possible.

Meanwhile, you should pay attention to shop the right gear that fits you well, below are 5 essential gears before you get on a motorcycle:

Your motorcycle helmet is going to be the most important equipment to prevent your head from injury when motorcycle goes down. 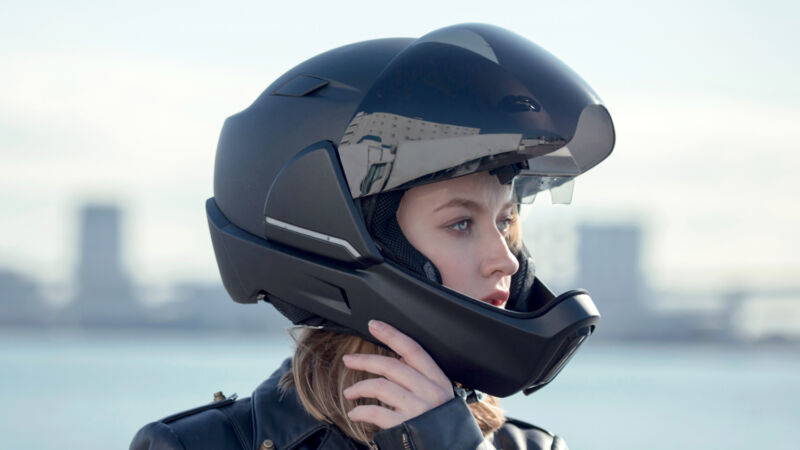 To find the right size:

To test the right fit:

The regular leather jacket isn’t built to protect you, please make sure it’s motorcycle-specific as it plays the same role as the helmet to protect your torso & internal organs in an accident. 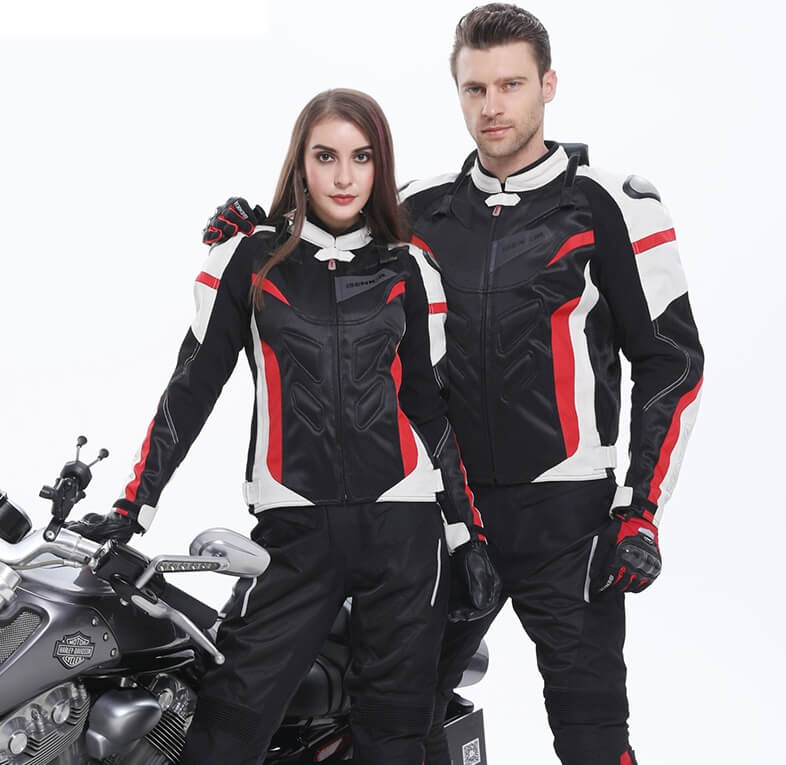 Don’t forget your leg is side by side to the engine. Pants could provide protection to your hips and legs.

A better pant should be made of the same materials as your jacket as it’s also designed to take on the destructive forces of an accident.

Proper motorcycle boots provide protection to your feet and ankles, it ensures you greater safety and comfort while riding. 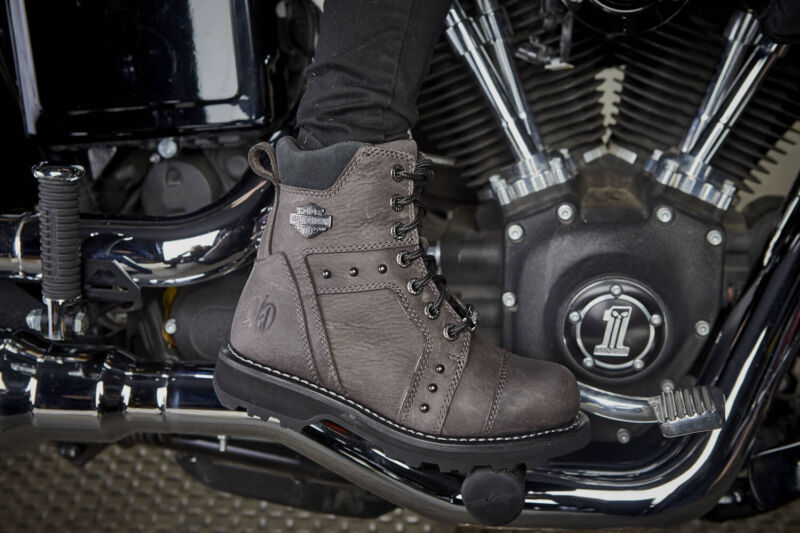 Gloves provide protection to your hands. The purpose of it is to reduce injury from being hit by insects and flying debris, as well as keep your fingers warm.

Once you’re dressed like Ironman (just kidding), you’re ready to get on the bike!​

Make sure to give your motorcycle a thorough inspection before practice hitting the road. Such as the T-CLOCS Inspection Checklist by the Motorcycle Safety Foundation. 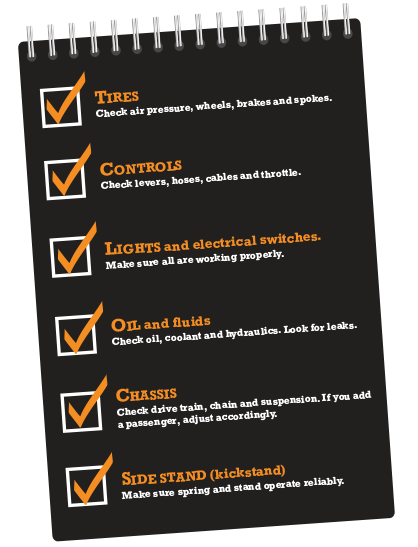 Step 3 – Get On The Motorcycle

Once you’ve dressed in the right-fit safety gear and finished the motorcycle inspection.

Let’s start to properly get on your motorcycle: 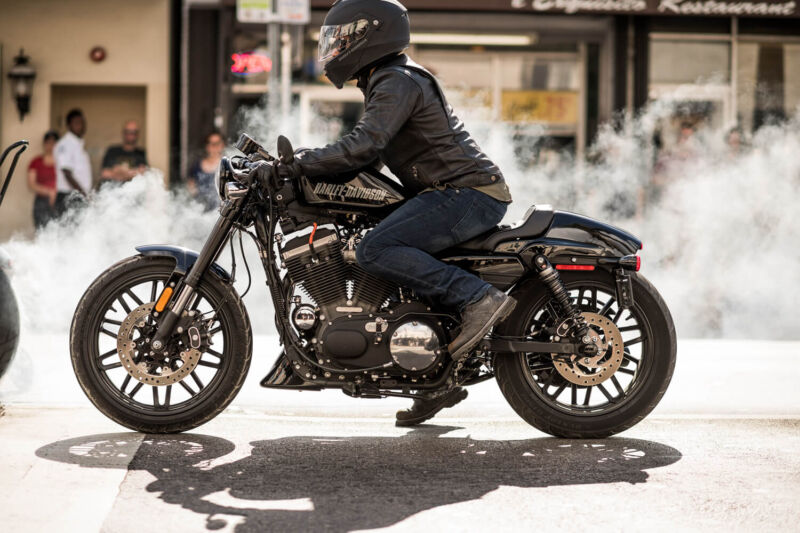 Get On The Motorcycle

Get A Feel On The Bike:

Step 4 – Get Familiar With The Motorcycle Controls

Well done! You’re on the motorcycle now, this is the best way to get to know how a bike operates and go over the functions of the controls.

Don’t be afraid as it’s not starting up yet, nothing would happen to you. Please pay attention to learn the below controls as your safety will be really replied on them! 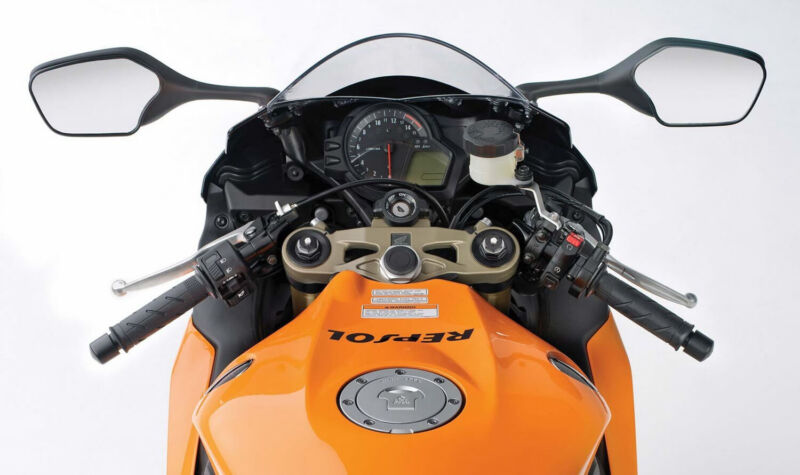 Let’s learn from left to the right side of the motorcycle, we’ve split them into 2 parts.

KEEP IN MIND: As a rule, the left side of your motorcycle controls gears, while the right side controls acceleration and braking.

The clutch is the lever just ahead of the left handlebar. Its function like a clutch pedal in a manual transmission car to disengage the power from the rear wheel when shifting gears.

When you gradually pull the clutch lever toward the handlebar, it means you’re slowly releasing the engine from the transmission. This action puts your bike in neutral status, thus allowing you to shift gears.

The shift is in front of the left side footpeg and is used to shift one gear up or down while you’re pulling the clutch lever.

The shift is executed by moving a lever up or down with the left foot, a typical shift pattern works like 1st gear, neutral, 2nd gear, 3rd gear, and so on. When shifting gears you’re able to see the appropriate number light up on your gauge.

Make it a habit of using the clutch every time you shift. First quickly pulling the clutch tightly towards your handlebar, then using your left foot to shift down or up to find your motorcycle’s neutral. Do takes some time getting used to and practicing by clicking the shifter back and forth, meanwhile to look for a green “N” to light upon the gauges.

As these controls are on the same left side, using your left-hand big thumb to play them:

The motorcycle throttle is located on the right handlebar – under the grip, it acts just like the gas pedal in a car to control the engine speed.

NOTE: A little twist will make the bike goes a long way, as a motorcycle beginner, you should always twist the throttle slowly to get familiar with the power because improper speed up can lead to a crash as the front wheel will leave the pavement.

Now let’s have a play with the throttle:

Therefore you know where the motorcycle throttle is and how to control it. Let’s move on as your right hand also controls one more crucial function: braking – the front brakes.

The front brake lever is located in front of the throttle, it is used to activate the front brake to stop the motorcycle front wheel moving forward.

NOTE: Much like on a bicycle, do not suddenly and tightly grab the front brake lever, if you grab it too hard, the front brakes can lock up and causing the bike to skid and even crash.

Smoothness is crucial here, a correct way to use the front brake lever is to squeeze it slowly and gradually increase the force.

The rear brake lever is near the right foot position, right in front of the right side footpeg. Use your right foot to press on the lever to use the rear brake to stop the motorcycle rear wheel moving forward.

Here comes a question: which brake should you use the best?

Safety experts indicate that in most circumstances, the most effective way to stop a motorcycle is to apply the rear brake first to slow a little bit of the speed, then to use the front brake.

Step 5 – Start To Ride The Motorcycle

It is time for you to start the bike and apply the above theory into practice. Let’s actually learn how to ride a motorcycle now, one step at a time to build muscle memory to picture them all together.

Please make sure you are now familiar with the motorcycle controls and know how they operate. If not, just go over them again for several times, or watch below video for better understanding.

Follow the following steps to start riding your motorcycle:

1. Make sure the motorcycle kickstand is in the UP status. As most modern motorcycles automatically shut off if it is still down when you put the bike into gear.

2. Make sure the kill switch is in ON status. As your bike won’t start unless it’s in the “On” position, if it’s in off status, simply flip it down now.

3. Turn the key to the “Ignition” position, which is typical to the ON position toward the right. You should see the dash lights up now.

4. Look for the green “N” lights up in the dash to set the bike in neutral. By doing so, the easiest way to do this is to use the left hand to pull the clutch lever, use left foot downshift to 1st gear then shift slightly up. Repeat this process several times until you figure it out.

5. Press the “Start” button with your right thumb. Press the starter button for a few seconds, release it as soon as you hear the engine sound. That means the bike is started now.

6. Warm up your motorcycle for at least 45 seconds. This is to make sure the engine will work properly and provide smooth & consistent power as you begin your ride.

7. Now using only the clutch to walk the bike forward. This practice is to help you get familiar with the clutch operation. While “power walking” the bike, you should pay attention to keep the bike steady with your feet.

You may stall the bike during this practice and it’s very common as a beginner. No need to panic, just restart the bike and keep practicing.

Repeat this until you can keep the bike upright when you pull your feet off the ground. You want to get a good sense of balance on your bike.

8. Next using both of the clutch & throttle to drive. In the practice of step 7, while you’re releasing the clutch, the bike could be stalling. This time, you could twist the throttle slightly to prevent it.

Now your bike should start moving smoothly then you can release the clutch completely and twist slightly again the throttle to keep going.

Once the bike exceeds the walking speed, you should put your feet on the footpegs. At the same time keep still roll on the throttle and try the straight-line riding.

While you’re moving faster and the end of the road is coming, it’s time to stop the bike especially if you haven’t practiced turning the motorcycle yet. 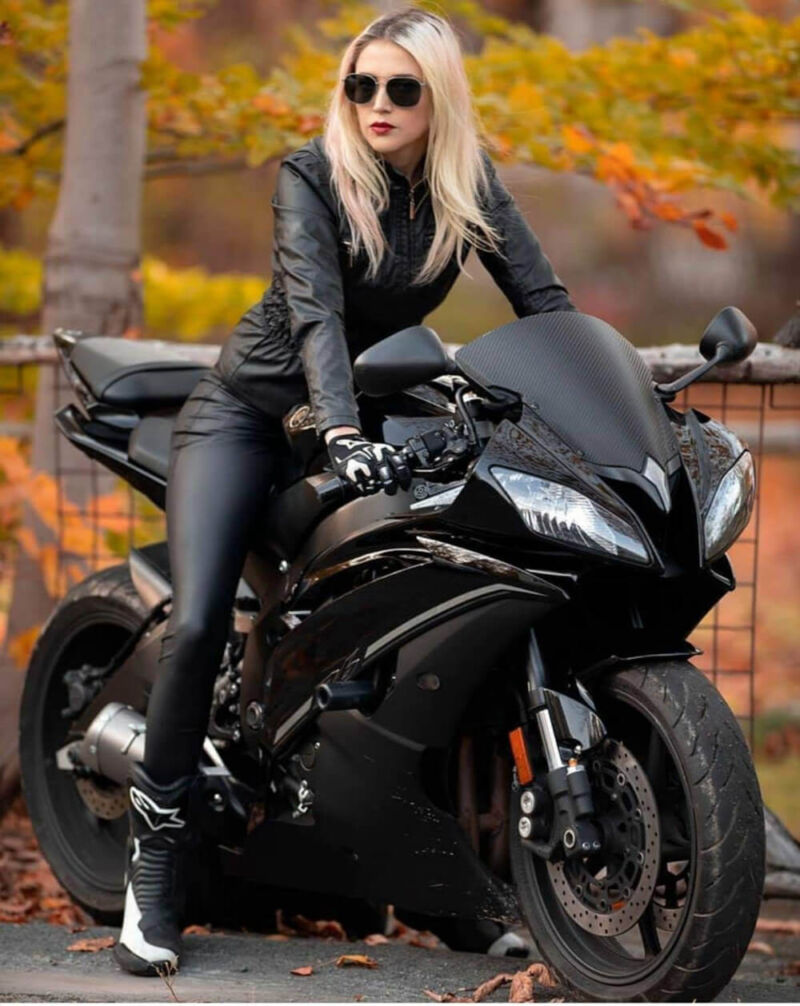 That’s it, now you’re able to not only ride on the bike but also stop it whenever you like.

Like we’ve mentioned above, you won’t be able to ride in a straight line, you’ll need to know how to steer your motorcycle. Actually turning is easier to do than to describe, just trust your instincts when you’re on a bike.

It’s much like a bicycle turning, to complete your turn properly, press the handlebar in the direction you want to go toward the left or right side of the bike, keep your head up and look through the turn.

For example, if you want to turn right:

You’re about to graduate after this section, let’s move on!

During the above practice of riding, steering and turning the motorcycle, we’re all play in the first gear of the motorcycle as 1st gear is usually used for starting the bike and slow-speed maneuvering.

At the time you twist the throttle for faster speed, I bet you must have heard the loud noise coming from the engine and feel it start revving at higher rpms. It typically means that you need to upshift gears now for high speed purpose.

It will take some practice to be able to feel and hear when it’s time to shift. Let’s practice unshifting gears now, make sure you’re able to start riding in a straight line:

To downshift, the steps are similar.

After you get a feeling of shifting, you can simply decide when to shift by yourselves but do not downshift to first gear unless you’re coming to a complete stop.

Meanwhile, try to get a feel for the “friction zone”. The friction zone is the area of resistance created as the clutch becomes engaged. This area allows for the transfer of power from the engine to the rear wheel.

Eventually, now that you’ve practiced starting, stopping, turning and shifting your bike. It is going to be one of your most incredible experiences, isn’t it?

Although the first few days of learning to ride a motorcycle could possibly be the most dangerous time in your life.

Keep practicing and enjoy this learning process, it’s amazing and you’re good to get your motorcycle license pretty soon.

See you on the road!